Nandi, the vehicle of Lord Siva 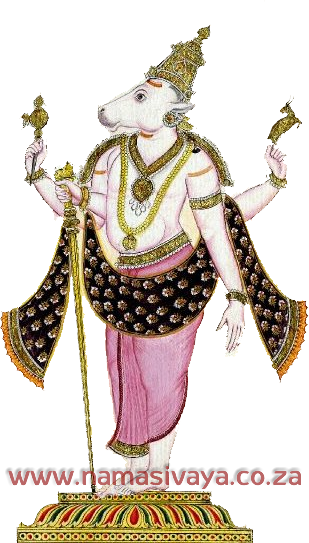 There was once a sage called as Shilada. Shilada did not have any children. of his own, but he adored children. He wanted to adopt a child, but he did not want to adopt just any child. He wanted a special child blessed by Lord Siva. So he worshipped Lord Siva for many years.

Lord Siva finally appeared before Shilada, 'What boon do you seek, Shilada?'

'A child. I wish to have a child, Lord Siva.' Shilada said bowing before Lord Siva.

Siva smiled. 'You shall have it soon' He said and vanished.

Shilada returned home a happy man, knowing that the Lord would bless him with a very good child. The next day he went to the farm to begin his ploughing, when he found a beautiful baby in the field before his plough. The baby's skin glowed with a beautiful white light.

Shilada stared at the baby transfixed, when he heard a voice from the heaven, 'SHILADA, TAKE THE CHILD. BRING HIM UP WELL!'

Shilada was overjoyed as he took the boy home. He named the boy Nandi. Right from his childhood, Nandi was devoted to Lord Siva. Shilada brought up the child with love and care. Shilada taught the child the Vedas and gave the child a good education. Nandi was a brilliant boy and learnt everything very fast. Shilada felt very proud of the child.

'Nandi!' Shilada called his son. Nandi came from inside the house. 'Nandi please make sure these sages are well looked after.'

Nandi looked after the two sages well and after enjoying the stay, the sages said that it was time they left. Before they were about to leave, Shilada and Nandi both prostrated before the two sages.

Mitra and Varuna first blessed Shilada, 'Have a long and happy life, Shilada. You have made us very happy!'

When Nandi fell at the feet, the two sages looked slightly sad. Slowly they said, 'Be well son! Be good to your parents and your teachers!' And they walked off, outside the house

However Shilada noticed the change in the expression of the sages. He ran outside the house, 'Great rishis!' He said breathlessly. He turned around and made sure that Nandi was inside the house and could not hear him,  and talked to the sages, 'You looked sad while blessing my son!' Shilada said feeling terrified, as he was thinking of unpleasant things...'Is...is something wrong?'

Shilada looked in absolute panic. 'What is going to happen to my son?' He whispered.

'Your son, does not...' Varuna cleared his throat, '...does not have long to live, Shilada. I am sorry...' He said lamely, looking at the horrified expression on Shilada'a face.

Shilada stood there transfixed for a long time. After a long time, he slowly walked back home with stooping shoulders and a broken heart.

Nandi immediately guessed something was wrong, 'What is it father? What happened? What...' Nandi asked, vigorously shaking his father.

Slowly and painfully, Shilada narrated his conversation with the two sages.

He expected Nandi to be scared or even that Nandi would even start crying. However Shilada was surprised when he heard Nandi's laugh. 'You were scared of what the sages said!' He said still laughing.

Shilada wondered what could be so funny and looked at his son without any expression.

'Father, you have told me that you have seen Lord Siva...' Nandi said with great devotion in his eyes. 'Anybody who has seen Lord Siva cannot be afraid of what the sages just said.'

Shilada still looked dumbly at his son, not understanding. 'Father, it is my fate to die, then Lord Siva can reverse my fate! He is the most powerful God and can do anything. Do you think he would let anything happen to us, when we worship him?' Nandi looked at his father challengingly. 'I don't think so., father..' Nandi said softly.

Shilada looked at his son as if looking at him for the first time. Slowly Shilada nodded his head and smiled.

Nandi bowed to his father. 'Bless me father!'

Shilada blessed his son, 'Be victorious my son!'

Nandi then went near the River Bhuvana. He entered the river and began his penance. His devotion was so great and his concentration was so high, that Lord Siva appeared almost instantaneously.

Nandi opened his eyes and before his eyes stood the most beautiful person he had seen in his whole life. Nandi looked at the God wanting to savour his image. He felt that he had nothing more left to ask. If only I could stay with the Lord always...

Siva looked at Nandi with lots of love, 'Nandi, your penance was so powerful that it dragged me here immediately! Ask me anything I will grant it to you!' Siva said.

'Lord I wish to be with you always.' The words were out of Nandi's mouth before he could stop them.

Siva smiled. 'Nandi I have just lost my bull, on which I used to travel. Henceforth Nandi, you shall have a face of a bull. You shall stay in my home at Kailash. You shall be the head of all my Ganas...You will be my companion, my vehicle and my friend, always!'

Nandi closed his eyes as tears flowed through them. The Lord had granted him his wish and a lot more...

Since then Nandi became Siva's vehicle, doorman, his companion and the head of all of Siva's attendants – the Ganas. Thus by sheer devotion Nandi was not only able to overcome his fate, he also rewrote it!

A few days later the Devas and the Asuras together churned the ocean for nectar. However the first thing that emerged from the churning was the poison Halahal. The poison was so strong that it threatened to destroy the whole world. To protect the world, Lord Siva collected the poison in his hand and swallowed it. Goddess Parvati who was near Lord Siva clutched Siva's throat to make sure that the poison was stored in the throat and would not affect Lord Siva.

However some Halahal slipped out of Siva's hands and fell on the ground. Nandi gathered the fallen Halahal and seeing his master drink it, he also drank it!

The Devas were staring shocked at what Nandi had done! Lord Siva was a God and besides he had Goddess Parvati to protect him, so nothing would happen to Lord Siva. But Nandi...

However nothing happened to Nandi. Siva looked at the dumb folded gods and smiled, 'Nandi is my greatest devotee! All my powers are his too and Parvati's protection will go to him too!'

The three of them smiled and then returned to Kailash.